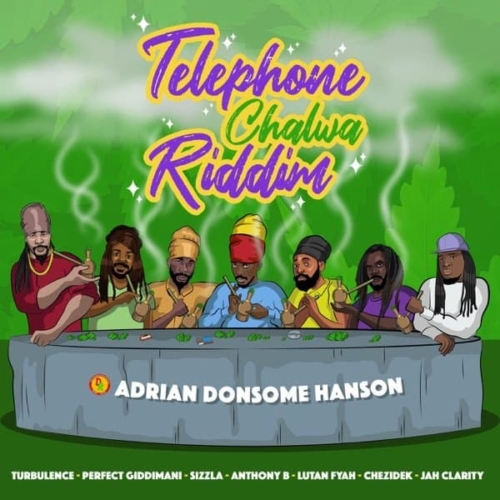 The project which according to JUNO-nominated producer Adrian ‘Donsome’ Hanson took four weeks to complete, features songs that are pro marijuana.

“Telephone Chalwa is a chalice pipe that Rastafarians use to smoke marijuana and this project is 100% marijuana driven. All of the songs by the artistes on this riddim express an appreciation for marijuana, hence the name of the project,” said Hanson.

The songs on the Telephone Chalwa rhythm are Telephone Chalwa by Turbulence, Marijuana Mi Want by Lutan Fyah, Bun Ganja 24/7 by Sizzla, Good Weed by Chezidek, Pass the Chalice Pipe by Anthony B, 12 months of Herbs by Perfect Giddimani and Marijuana by Jah Clarity.

The singles by Turbulence and Lutan Fyah were both released on March 18th.

Hanson, who is originally from Clarendon, migrated to the United States more than ten years ago. Through the years, he has released several projects, including the various artistes compilation series Turn it Up Vol. 1, Freedom Sound, and Black Tears rhythm. Black Tears and Freedom Sound hit number four on the sales-driven US Current Reggae Albums chart last year.

He produced Ammoye’s Give it All which was last year nominated for Reggae Recording of the Year in the JUNO Awards, Canada’s equivalent to the US Grammy awards.