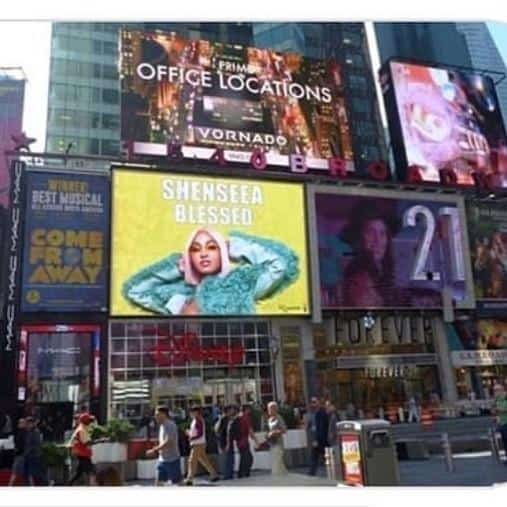 Shenseea is doing all she can and pulling out all the stops to promote her new track “Blessed” featuring American rapper Tyga.

In order to increase visual stimuli the Shenseea camp have opted to go the electronic billboards route in promoting the new club banger, which have been spotted across Jamaica and in the United States. However, the artist’s most pricey advertisement came through recently with a spot in New York’s Times Square.

According to Investopedia, the cost of buying add space in Times Square ranges between US$ 1.1 million to US$4 million. Adding to that , it can cost up to US$3 million per month to advertise on Time Square’s largest billboard. Figures have not come out yet how much it cost the Shenseea team to land her a space but I am sure its plain to see that she has ‘gone for broke’.

The official music video for Shenseea and Tyga’s “Blessed” has ticked over 9 million views since its release two weeks ago.

Shenseea recently created history becoming the first Jamaican Dancehall artist to be signed by American label Interscope Records. We are now starting to see the work of the label in their bid to elevate Shenseea into a global brand. Interscope partnered with producer Rvssian’s Rich Immigrants imprint for the deal which spawned “Blessed.”

“Interscope always strives to work with artistes that can move culture on a global scale. Shenseea is already doing that,” Interscope’s EVP Joie Manda reportedly said, adding “She represents Jamaica in a loud and truly authentic voice. We couldn’t be any more pleased to partner with her and Rvssian. Many artistes go to Jamaica to learn culture, Shenseea teaches it.”

It will be interesting to see where the track takes Miss Chinsea Lee. It can only be upwards it seems. Lets just hope she steers clear of negative deterrents.